Morgan’s Wonderland recently broke ground for a multi-million-dollar expansion, Morgan’s Inspiration Island, the world’s first ultra-accessible splash park where guests of all ages and abilities can get wet and have fun together.

“In many ways, creating Morgan’s Inspiration Island feels a lot like it did when our team designed and built Morgan’s Wonderland with special-needs individuals in mind – it’s never been done before,” said Gordon Hartman, CEO of The Gordon Hartman Family Foundation.

“For the past two years, we’ve been working with water park consultants from Texas, Arizona, Florida and even Canada as well as local doctors and special-needs therapists. Now we’re ready to begin laying pipe, installing pumps and building facilities with a target completion of spring 2017. We believe this new attraction will be tremendously popular because even kids and adults in wheelchairs will be able to have splashy fun in the South Texas sun.”

Morgan’s Inspiration Island, which will be situated between Morgan’s Wonderland and the STAR (South Texas Area Regional) Soccer Complex, will overlook the theme park’s 8-acre catch-and-release fishing lake. Guests of both the splash park and theme park will enter through the Morgan’s Wonderland Welcome Center.

Six major elements will comprise the tropically themed paradise inspired by Hartman and his wife Maggie’s 22-year-old daughter, Morgan, who deals with both cognitive and physical challenges. “We decided to call our new attraction Morgan’s Inspiration Island because Morgan truly has been the catalyst for every project we’ve pursued to help the special-needs community,” Gordon Hartman noted.

Maggie Hartman added that “Morgan’s Inspiration Island – like Morgan’s Wonderland – will concentrate on inclusion and inspire guests with special needs to do things previously thought to be impossible. Those without disabilities and those with, including individuals in wheelchairs and guests with hearing and visual impairments, will be able to play alongside each other and gain a greater understanding of each other.”

The River Boat Adventure ride will twist and turn more than an eighth of a mile through a jungle setting with bird and animal sounds in the background. Five water play areas – Hang 10 Harbor, Rainbow Reef, Shipwreck Island, Castaway Bay and Calypso Cove – will offer a variety of splashy elements such as raintrees, falls, pools, geysers, jets, water cannons and tipping buckets. Just like Morgan’s Wonderland, every element will be wheelchair-accessible, and waterproof wristbands with RFID technology will be available so parents can go to a Location Station and easily ascertain the whereabouts of their children and other members of their party. Hartman paid special tribute to philanthropist Harvey E. Najim, chairman of the 2015 Morgan’s Wonderland Capital Campaign that’s raising funds for Morgan’s Inspiration Island as well as for a larger, multi-functional building to house The Academy at Morgan’s Wonderland, a school next to the theme park for students with special needs ages 12 to 24.

“We’ll never be able to adequately thank Harvey Najim for his passion when it comes to doing great things for people with disabilities and special needs,” Hartman said. “Harvey is truly a world champion when it comes to generosity. Those whose spirits will be lifted by Morgan’s Inspiration Island have Harvey to thank for his resolve in securing the funds to take a great idea and make it reality.”

Hartman noted that Morgan’s Inspiration Island is about a year-and-a-half away from opening, “but we have to start now because so much equipment must be installed underground before the splash park can take shape above ground. There’s also quite a bit of complexity involved. For example, we’ll have the capability of heating water in some areas so guests with sensitivity to cold can still splash and play.

Hartman further pointed out that the splash park has been designed with water conservation in mind. Water used in the various play elements will be continuously filtered and recirculated, and it will be stored in huge underground tanks when the park is not in operation. 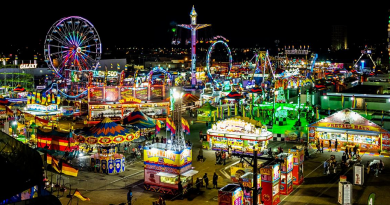 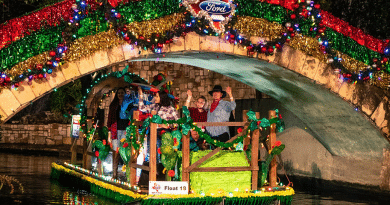 Holidays Back in Full Festive Swing in San Antonio