Valencia, California — Go Big. Go Backwards! For a limited time only, Six Flags Magic Mountain’s popular suspended looping coaster, BATMAN™ The Ride, is more intense than ever as riders dare to take on an all new experience – going backwards!

As the roller coaster climbs the 10-story lift hill, riders will take in the full scope of BATMAN™ The Ride’s track as they anticipate the adventure that lies ahead. The train will reach speeds of 50 mph and travel through 2,700 feet of track, all while maneuvering hairpin turns, vertical loops, corkscrews and a zero-g roll… all while going backwards! The excitement is magnified since guests cannot see the twists and turns that await them.

“In honor of BATMAN™ The Ride’s 20th anniversary, we’re offering our guests an entirely different ride experience by going backwards. No matter how many times you have been on BATMAN™ The Ride’s, nothing compares to the thrill of racing down 10 stories facing the other direction,” said Bonnie Rabjohn, Six Flags Magic Mountain park president. “You have no idea what is coming next. This is a tremendous new experience and one guests should take advantage of quickly since it will only be available during the spring.”

Celebrating its 20th anniversary on March 26, BATMAN™ The Ride has given close to 32 million thrilling rides and reigns as one of the most popular roller coasters in the world. BATMAN™ The Ride backwards opens to the public on Saturday, March 22.

Also going backwards this spring, trains on the iconic “woodie” Colossus, hit the tracks in reverse. Covering 10 acres of land, with tracks measuring nearly a mile long at 4,325 feet, this classic wooden coaster features drops of more than 100 feet and a total of 14 hills including a climactic triple jump towards the end … backwards! Colossus celebrated its 35th anniversary in June, 2013.

Six Flags Magic Mountain 2014 Season Passes provide unlimited visits for the entire 2014 season and can be purchased online for a low monthly payment through the annual membership program. For a limited time, with the purchase of four or more Season Passes, guests will receive a free upgrade to Combo Season Passes which include with every pass, a free Hurricane Harbor Season Pass. Additional Season Pass perks include free tickets for friends and more. Offer expires April 27, 2014. Season Passes can be purchased at the main gate ticket booths or online.

The post BATMAN™ The Ride Backwards Opens for a Spring Exclusive at Six Flags Magic Mountain appeared first on I-5 Exit Guide. 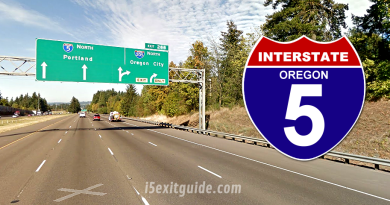 I-5 Night Paving Will Detour Traffic Through Medford

I-5 SideTrips: The Rogue-Umpqua Scenic Byway