The New Year’s Eve event, the first ever for Universal Studios Hollywood, is included in the price of theme park admission and invites guests to spend the day and night enjoying its many popular rides and attractions with a special park-wide countdown party featuring multiple entertainment hubs with DJs and live music, starting at 9:00 p.m.

Universal Plaza, Simpsons Plaza located adjacent to “The Simpsons Ride” and an area near “Jurassic Park—The Ride” will transform into three uniquely-themed electrifying party hubs that will culminate simultaneously at midnight with a traditional New Year countdown and a spectacular fireworks display.

Food and beverages, including specialty desserts, champagne, beer and wine, as well as 2018 memorabilia will be available for purchase.

With its festive environment, guests can toast the New Year with the spirit of the holidays already resonating throughout Universal Studios Hollywood. “Christmas in The Wizarding World of Harry PotterTM” introduces “The Magic of Christmas at Hogwarts TM Castle.” Several times each night, guests can enjoy amazing images inspires by the Harry Potter films as they come to life in breathtaking digital light projection on the backdrop of Hogwarts castle. And with extended hours on December 31, guests can celebrate the final day of “Grinchmas

” with The Grinch, his faithful dog Max and a roster of Who-ville Whos.

More information is available at www.UniversalStudiosHollywood.com. 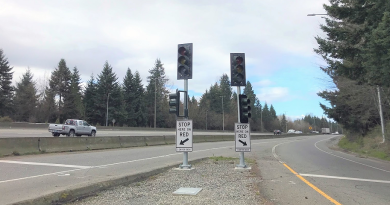 Ramp Meter Helps Traffic Flow on I-5 in Lacey