The Space Needle will celebrate the arrival of 2017 with its 32nd annual fireworks spectacular – T-Mobile New Year’s at the Needle. This year’s pyrotechnics display has been extended to ten minutes making it the largest show the Space Needle has ever produced. For the fourth year in a row, hometown partner T-Mobile, America’s Un-carrier, is the exclusive sponsor of the West Coast’s premier New Year’s Eve celebration.

The Space Needle will be illuminated in T-Mobile’s distinctive magenta brand color on Dec. 30-Dec. 31 as a precursor to the New Year’s Eve festivities.

Pyro Spectaculars, global fireworks experts for over 100 years, will design and coordinate the ten minute display. Pyrotechnics will illuminate the entire Space Needle from top to bottom. Gala New Year’s Eve parties are being held on the Observation Deck and at the SkyCity restaurant and have already sold out.

More than 20,000 people are expected to gather on the Seattle Center campus to watch the T-Mobile New Year’s at the Needle show. The entire Seattle Center campus will be one big party with thousands of free giveaways from T-Mobile as all the revelers watch the amazing pyrotechnic effects being fired from 87 different locations on the iconic landmark. An estimated 400,000 will view the show from surrounding neighborhoods, along with another half-million tuning-in from home.

The post I-5 RoadTrip – Seattle Space Needle Lights Up The Sky New Years Eve appeared first on I-5 Exit Guide. 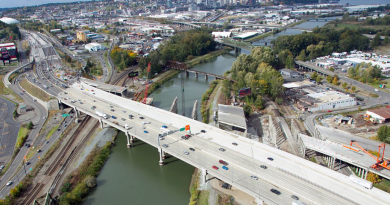 After Two Decades, Southbound I-5 HOV Lane Now Open From Fife to Tacoma